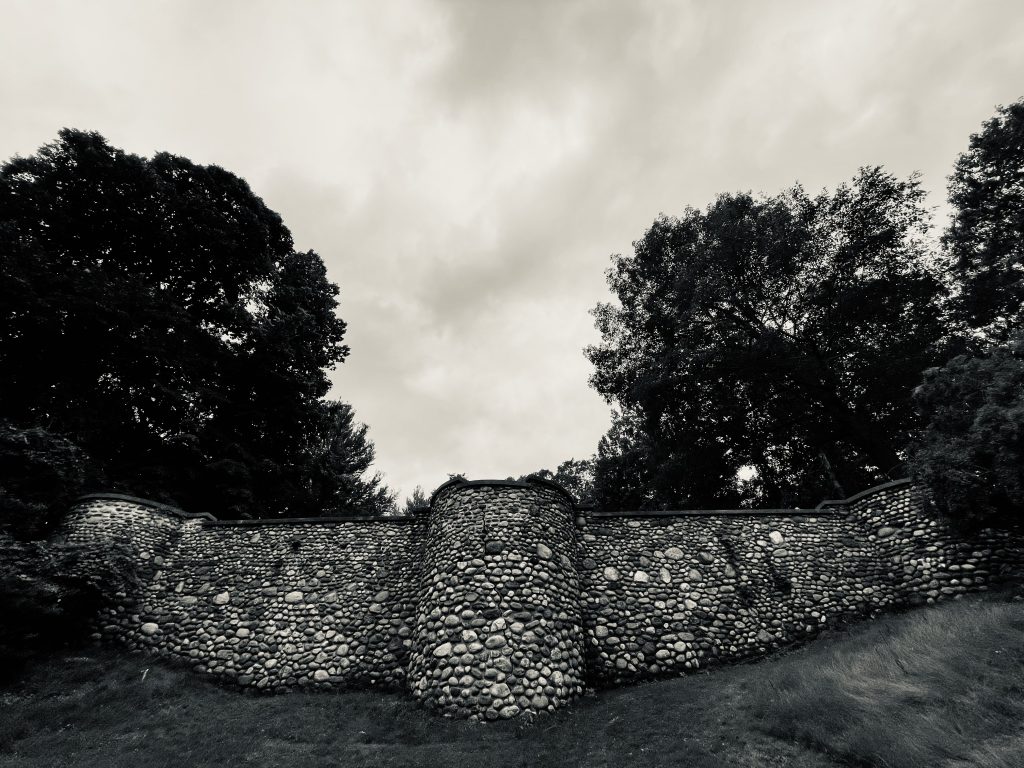 On a blustery fall day, it’s not easy to spot sea glass with all those leaves flying about. With the Rochester-gray skies, it added this boss-battle level to a normal beach combing afternoon. Yet there I was on Durand Eastman Beach with a few blue-green shards in my pocket…hands chapped, hair wind-slapped, scouring for treasure between leaf-mâchéd stones.

The sounds of droning waves were my only company…and honestly, I’m not even sure why I’d come that day. I suppose when you’re lonely, being alone is what you do best. Thinking back, I remember telling myself that I should really head back to the car…and that’s right when I saw it, or maybe heard it first. The lake washed over the object making these uneasy gurgles with each gasping pass.

No, it wasn’t sea glass or anything colorful…just an odd-shaped piece of driftwood sticking straight out of the water. It probably looked about as strange as my lone presence on the beach. Any gull looking down on me would have seen a maroon flanneled loon skittering back’n’forth, back’n’forth…all the way down the shore. Perhaps the gulls knew of a better path flying overhead, or maybe they were smart enough to stay the hell away.

I pulled the pale driftwood out of the muck. It was porous, fairly light, and smelled like everything else down here. But something immediately seemed off as I turned the limb over studying its pocked surface. So what do you do when you realize you’re holding human remains? I bet most would have dropped it in full-bodied convulsions, sploosh-sploosh-splooshing it out of the water. Only I didn’t.

How long had I been standing in the lake? I really cannot say, but the gray skies were scrubbed charcoal, and the few cars that drove past touched treetops with headlamps, headed elsewhere. I should have been elsewhere. It was a creak and then crack of branches that snapped me back to my senses. Hairs and goosebumps raised tiny hands on the back of my neck, all with the same question, “May we please be excused?”

I turned my head on a slow swivel towards two waist-high shapes that growled in the small woods on the embankment behind me. Shear white hounds that I could see straight through, yet they threatened all the same. My car was the furthest away it could be at the opposite end of the park. So I frantically stumbled in the only direction I could, twisting both ankles on the slick footing.

You’ve heard the stories a thousand times…the White Lady who wanders the shores of Lake Ontario, sometimes with her two hounds, searching in perpetual desperation for the slain remains of her daughter. There are so many variations: the White Lady offed herself or she dropped dead of a broken heart, that her daughter ran away, or was club-bludgeoned by her desperate boyfriend, or strangled by no less than six sets of psychopathic, slightly sweaty, scarred hands. But through all of the versions, one thing’s always present – the White Lady’s Castle.

And that’s where the legend breaks down. That castle wasn’t hers, and it’s not even a castle…just some old hotel refectory that gathers more rubble and rumors with each passing year. Yet here were two very real ghastly hounds chasing me up the bank and across Lakeshore. I headed not back towards my car, but away and up the opposite hill. I was being corralled towards the White Lady’s Castle with a tibia, or was it a fibula, waving wildly in one hand.

You would be correct to say I was petrified of these spectral hounds, but my mind was a few steps ahead and unravelled much further at another thought. What was I being herded towards? Out of breath, out of heartbeats, I limped up the castle hill noting something – very – different. You’ve been there, I’ve been there, we’ve all been to the White Lady’s Castle…and never, never ever, had I seen before on its cobblestone face a wooden door, wide open.

With no other options, I ran inside and shut the door oblivious that ghosts may not be bound by the same physical laws. But it worked. The scratching and howling drifted away as I turned with a bone and a phone with its flashlight clicked lit. I spun a full circle or possibly two, only I didn’t see that door anymore…just cobblestone walls on all sides. Like a tomb.

That must have been gravel beneath my feet crunching as I stepped about…except my foot crunches soon had a distant foot-crunching cousin somewhere else in the darkness. Something was trying terribly hard to mimic each of my shuffles. I swung the phone, a hysterical strobe light, in every direction at the same time. “You stay away,” I heard my mouth mouthing from a likely and soon-to-be fresh grave. The crunching edged closer.

Slinking back towards my doom, I bumped a heel into something hard with a rattle. I let out a shriek turning towards a wooden box on the ground with its lid now knocked off. In it…a collection of knuckles and bones, a few ribs and a skull with this gruesome dark hair that was matted down by an ivory hair clip. Something in that box smelled sour. The last foot crunch was the slowest and closest yet. I looked up into the face of the dreaded White Lady. Her face was contorted, her eyes were distorted, and her body was draped by a tattered pale gown. I couldn’t take my eyes off of her neck that was unnaturally crooked, and adorned by a ripped rope cravat.

What’s the rule of etiquette when swiping through a dead woman’s cranium using her dead daughter’s forearm? The bone loosed from my grip then fell into the box with the other dead things. Her look said it all, though the White Lady uttered nothing. Instead her hand seemed to extend around my entire waist, hurling me into the cobblestone with the force of eight angered bears. She looked down at the wooden box as if satisfied with the addition, then back at my crumpled body. She had what she wanted – why not let me go, I more or less thought with a few extra choice words. The Lady’s look pierced right through me as if understanding the unspoken, and then my phone light shut off. I heard a whimper…I’m pretty sure it was me. I heard gravel crunches.

And then I heard…droning waves. My hands were clutching leaves like wet cash. I jumped up looking this way and that way, not quite comprehending how I was back right where I’d been hunting on the beach. My phone, a muffled lighthouse, glowed from inside my pocket.

I don’t remember running back to where I’d parked, or unlocking the car door, or crying into a Bill Gray’s wrapper I’d thrown on the floor mat two weeks prior. Just driving away, keeping my watery eyes straight and my jittery hands firm as I idled past that place one final time.

This White Lady’s Castle, it may not be an actual castle or anything related…it’s just some unlucky place near where some terrible thing happened some long time ago. Only none of that matters anymore, does it? I stomped on the gas. Because it’s her damn castle now…