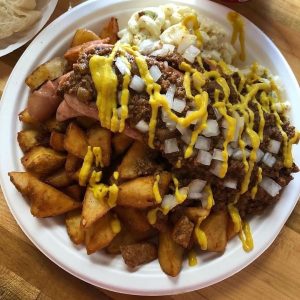 The garbage plate is a perfect example of extreme cuisine. What started as a late-night hangover cure has become one of the most famous dishes in upstate New York.

It was born in Rochester, New York, at Nick Tahou Hots – the landmark restaurant made famous for this classic regional specialty. Nick Tahou’s earliest version goes all the way back to 1918 when it was originally called “Hots and Potatoes.”

So what exactly is it? Basically, it’s a plate piled high with:

It wasn’t until many years later that the dish was officially renamed the “Garbage Plate.” The restaurant and bar had become very popular with Rochester’s community of college students, and not knowing what exactly it was called on the menu, would simply ask the wait staff, “Can I get one of those plates with all that garbage on it?”

Whatever you call it, and wherever you get it, you should definitely try this local favorite. And if you’re having a hard time figuring where to go, check out our post on the 25 Best Places To Get A Rochester Garbage Plate.

THE BEST DEALS, EVENTS + INFO DELIVERED TO YOUR INBOX

Thanks for subscribing! Please check your email for further instructions.

Something went wrong. Please check your entries and try again.